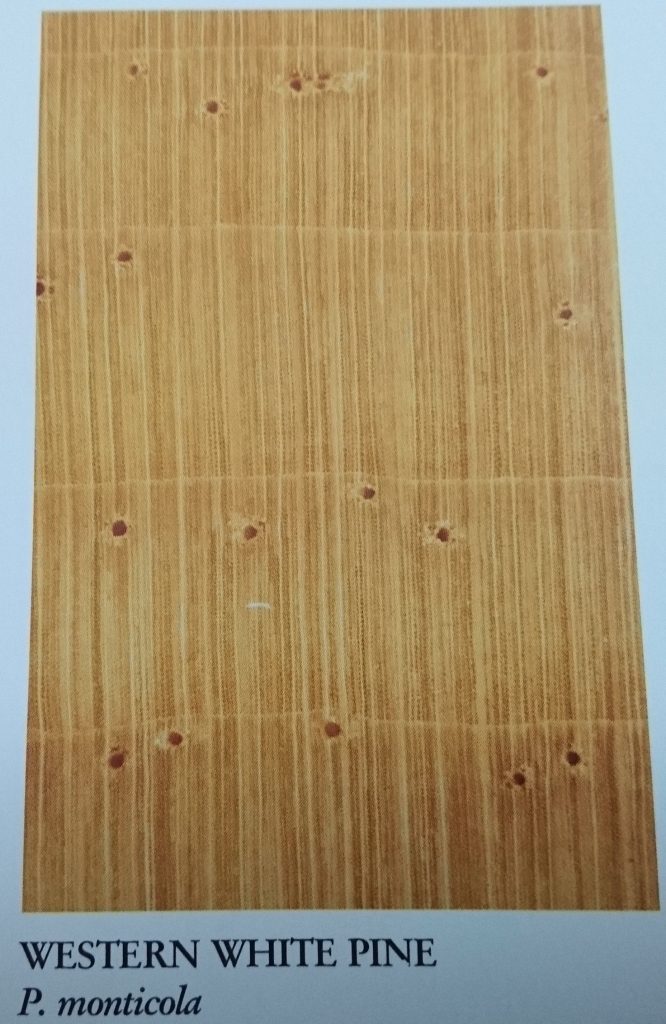 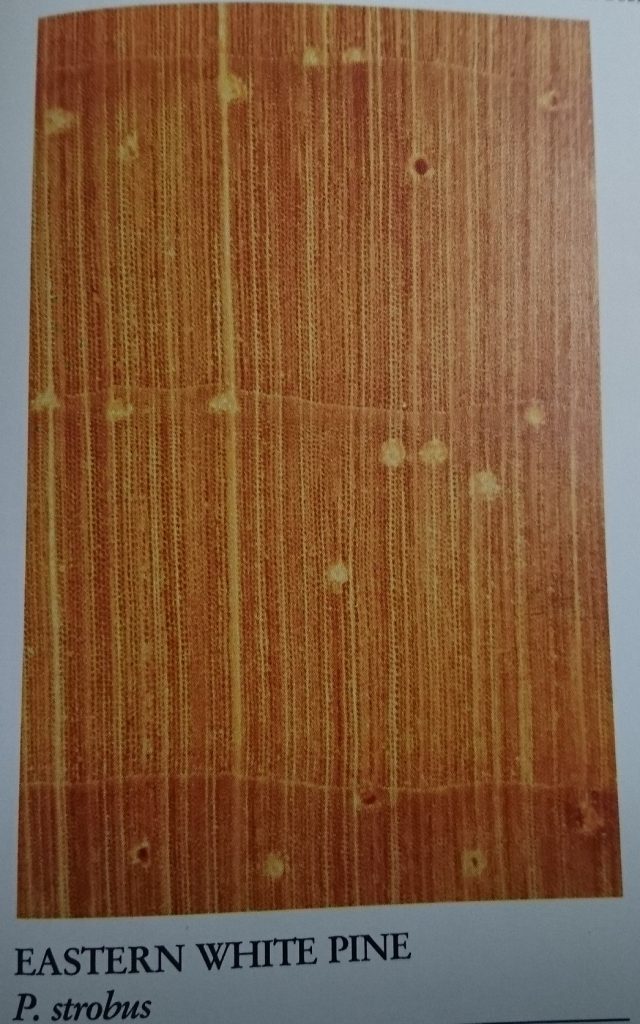 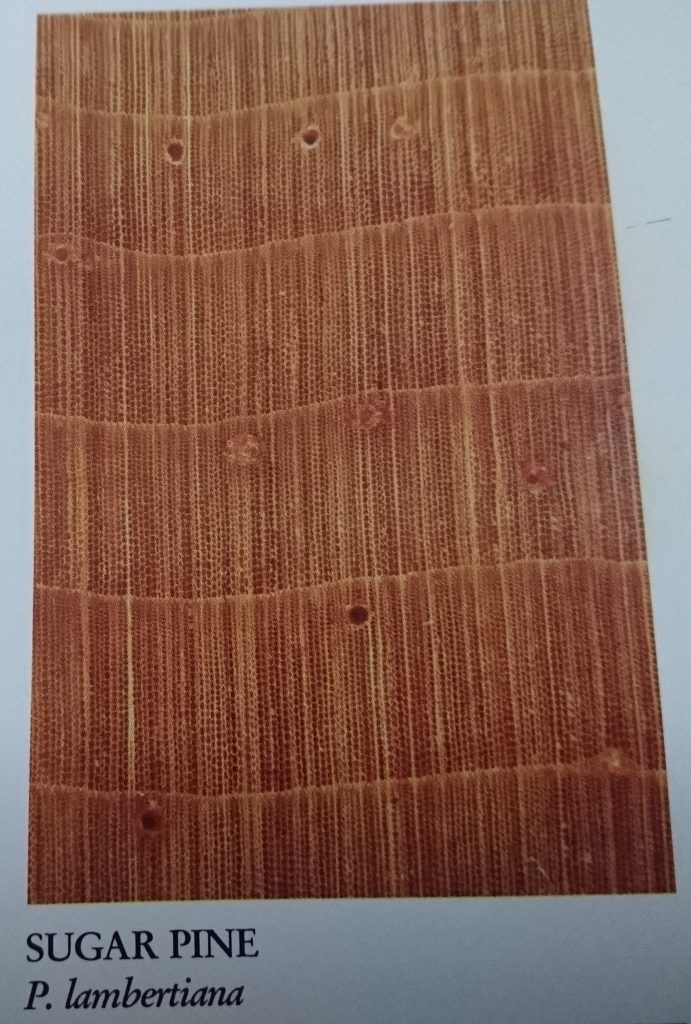 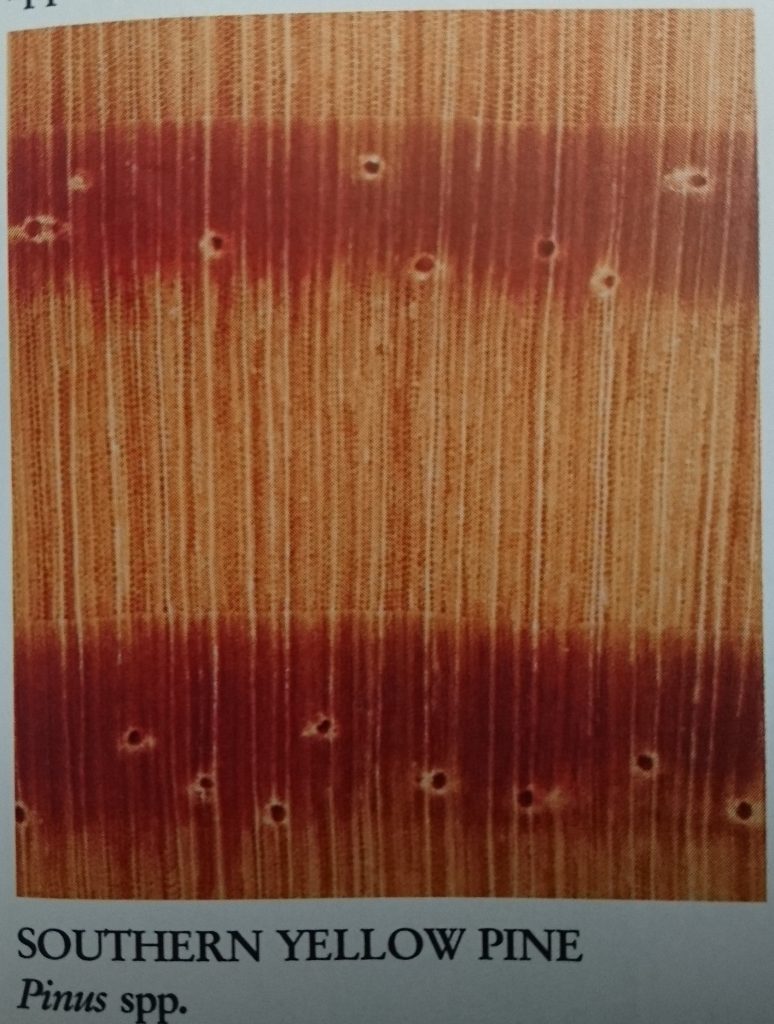 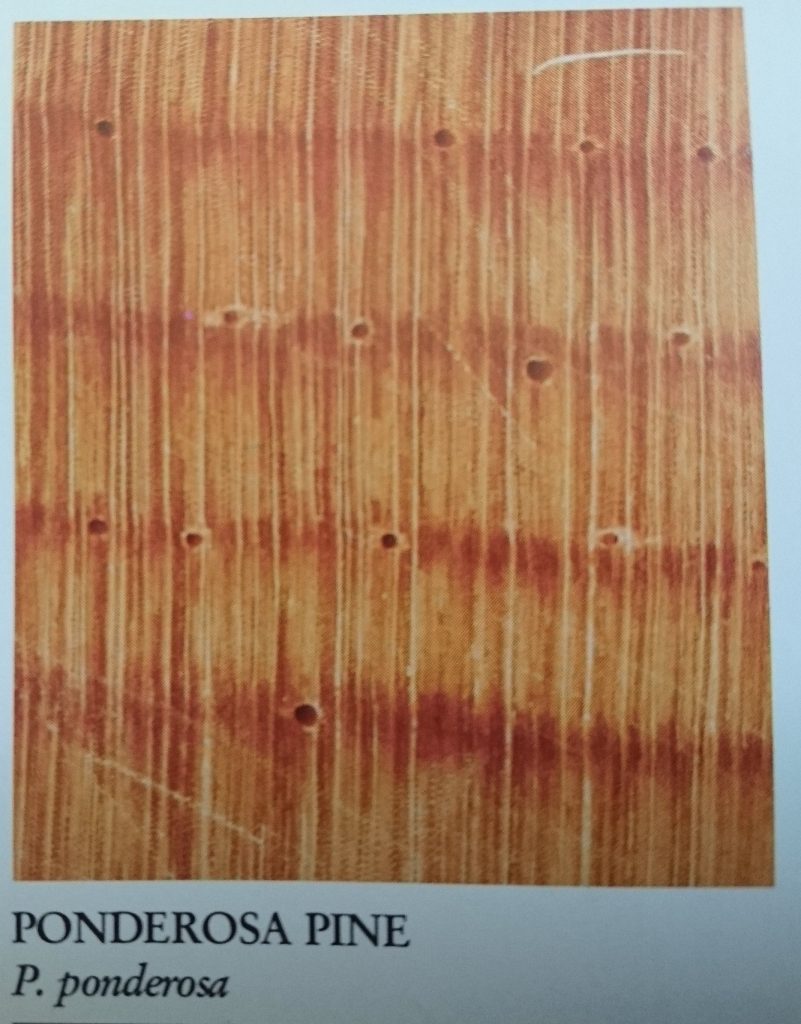 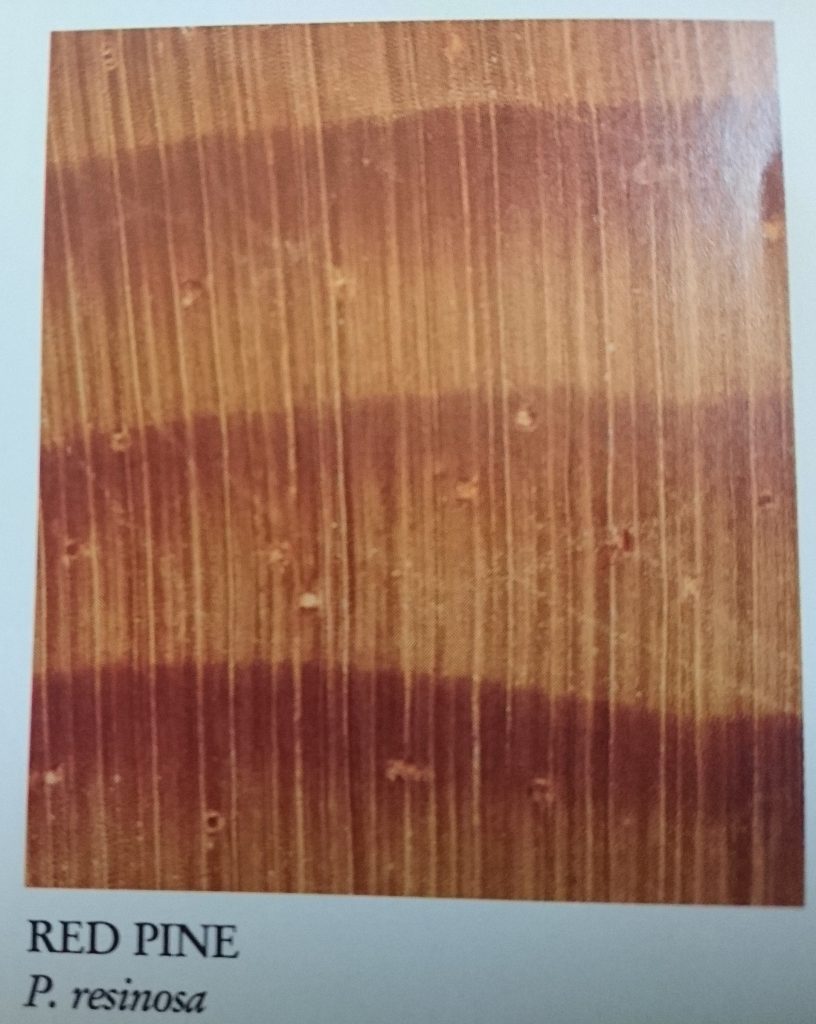 The pines, which comprise the genus Pinus in the family Pinaceae, include a very large and diverse group of species. They typically  have large diameter  resin canals  whose  epithelial  cells are  thin walled, in contrast  to the smaller  resin canals and thick walled epithelial cell of Douglas fir spruce larch group.

The pines can be separated into two major subgroups,  soft pines and hard pines. With some abnormal exceptions such as slow growth rate  and reaction wood  the qualities  of the wood of these  two groups can be summarized as follows:

Trees of this subgroup can be recognized by the fact their needles are borne along the twigs in groups  of five. The three principal soft pine species are eastern, white pine, western white pine, and sugar pine. Because of the general similarities among there woods, individuals specimens cannot  always be identified with certainty as to species. As indicated, eastern white pine generally has finest texture  and the smallest resin canals. Sugar pine has the  coarsest testure and largest resin canals. In western white pine  they  are intermediate in size. The resin canals in sugar pine are usually  quite conspicuous, often appearing as prominent dark streaks along longitudinal surfeces. These streaks can still be seen in older samples, because the wood  never ages to the dark shades that white pines commonly do.

The horizontal resin canals of the sugar pine are the largest among the three species. These transverse canals in fusiform rays often  show as distinct  dark specks on tangential surfaces. However, the occasional piece of sugar pine may have surprisingly inconspicuous resin of eastern white pine will display prominent resin canals. It should be noted, that although the wood of all three soft pines is generally even-grained reaction wood drastically changes  the woods appearance and  usually  produces  an uneven grain due to the dense latewood formation.

Although texture and resin-canal size will usually provide a basis for separating a typical piece of eastern  white pine from a typical piece  of sugar pine, the structure of either wood can integrate with western pine: microscopic  anatomy provides a more  reliable means of separation. The cross-field  pitting of all three soft pine is classified as windowlike, but  there is sufficient variation in this pitting  to provide  a basis to attempt separation of all three woods.

Examine  cross fields in several early wood areas to arrive at a general or average cross-field  appearance; never  make a judgment based solely on a small portion of a single  ray.  Note the number of widowlike pits, as well as the shape  and percentage of the cross field occupied by the pits.

Cross fields with three pits are commonly found, and occasionally four or five pits are seen.

Western white pine is more or less intermediate. Its paired  pitting is more common than  in eastern white pine and more angular, less oval and  more  crowded than in sugar pine. However, eastern and western  white pines are sometimes  quite similar.

Two additional species of soft pine fond in western North America are limber pine and white bark pine whitebark pine  can  usually  be distinguished visually from the other soft  pines by dimples on tangential surfaces; limber pine can be  identified microscopically  by its resin canal crystals.

This group includes trees whose needles are generally borne along their  twigs in group of  two or three. Because the woods of the many species in this large group cannot  be separated reliably, it is appropriate to consider them in the following groups:

They are eleven species of southern yellow pine, of which four loblolly, shortleaf, longleaf, and slash  account for about 93%  of the standing timber. These trees grow principally in the in the southeastern and southern Maine.

Although  it accounts  for only 1%of the total volume of southern yellow pine, it is included here  because its  range  overlaps with that of red pine, in the  north east,  the  two  wood  are often confused, especially  in period furniture.

Wood of the southern yellow  pines is characterized  by  its heaviness  and hardness; Wood  of average growth rate  displays very  dense latewood: Slow-growth  samples or juvenile wood may look more even-grained due to narrower or  lighter  latewood. South ern yellow pine is sometimes confused with tamarack or Douglas-fir but is distinguished from  there  species by its larger resin canals and distinctive  “piney” odor.

The western yellow pines include two important species, ponderosa pine  and lodgepole pine. These  woods, especially  old-growth ponderosa pine, commonly have very narrow, almost imperceptible latewood. Samples of this kind appear very even-grained. However, when a transverse surface is viewed with a hand lens, the clear, abrupt transition  from earlywood  to latewood that  characterizes the hard pines is evident. Even on longitudinal surfaces, careful examination of the growth  rings reveals  a sharp delineation between earlywood  and latewood. The growth rate of western yellow pines ranges from slow to moderate thus, some pieces  have growth ring of medium width  (they are seldom wide) that have more distinct latewood.

Generally, medium to wide growth  rings and pronounced, very dense latewood in a hard pine. Wood samples that have medium-narrow to very narrow growth with rings narrow  latewood and moderate density  contrast are probably western yellow pine. However, there is considerable overlap in general appearance, and many  samples  cannot be identified with certainty.

Even with a microscope, there are no feature that consistently and absolutely separate the southern  and  western yellow pines.